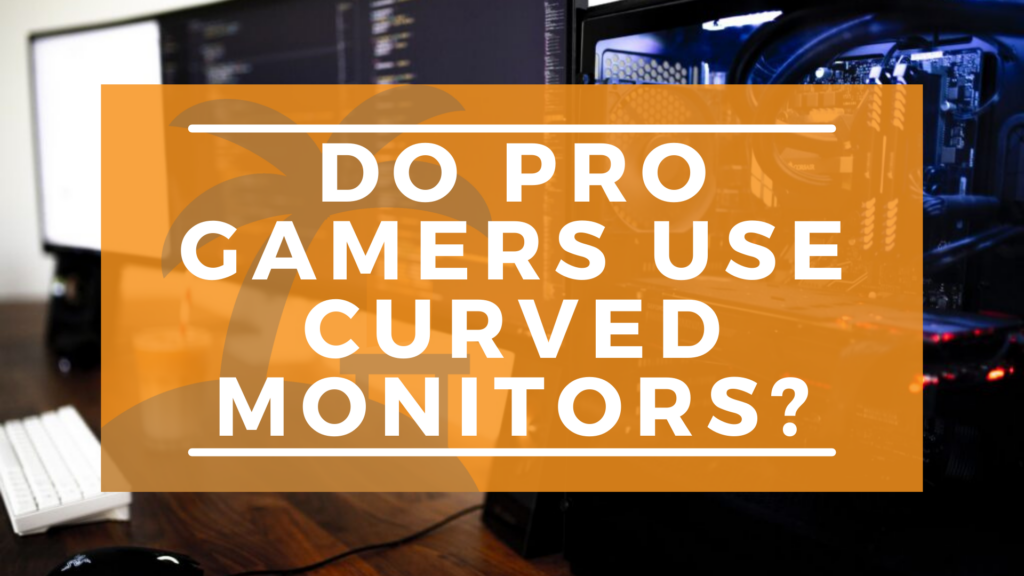 All work and no play never worked for a productive person, so it’s only standard that a person finds a proper past time to get his or her mind off work. There are numerous ways to busy yourself and let your hair down, but only a few areas excellent as playing video games.

However, wouldn’t it be fun if your pastime becomes a paying profession, and you don’t have to bother about a long day of office work? Well, that’s how professional gamers make their money, and that’s what motivates them to be better than the competition. They practice for long hours at a time so that they’ll be razor-sharp for any local or international gaming tournament.

Professional gamers are to be respected, as they work just as hard as any remote working individual. They have set goals, have targets they strive to achieve, have tasks to meet up with, and pay good money to get the necessary equipment.

Speaking of necessary equipment, here we’ll be looking at one of the essential components of a professional gamer’s portable monitor. We will be checking whether professional gamers ever use curved monitors for gaming (1).

Also, we’ll be checking out the benefits of a curved monitor and whether such services even exist in the first place. Further along the line, we’ll be looking at the downsides of using a portable monitor and that such monitors are used. So without further ado, let’s plugin, test, and know the essence of the super-hyped curved monitor.

Do Pro Gamers Use Curved Monitors? 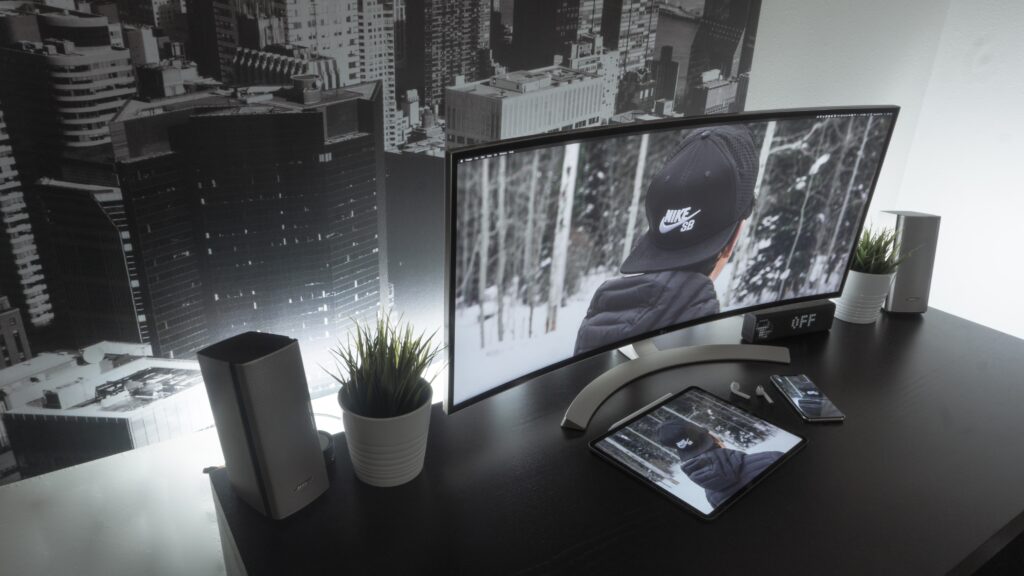 Professional gamers are some of the most meticulous and calculating professionals on planet earth. That’s because the margin of error is so tiny, so they set out to acquire any slight advantage over their undisclosed competition.

Professional gamers won’t know their opponents until they square off face to face, and as such, there’s no way to prepare data before time.

As such, pro gamers have developed the art of putting themselves in so many different scenarios to ensure that they’re as good as they can be.

One of those things that they always tend to do is equip themselves with proper, fast, and immersive portable 24 Inch Monitors. The reason being that they would play against other opponents on this platform, so it’s better to get used to it.

As far as portable monitors go, professional gamers prefer to practice on a noncurved monitor, as it’s next to impossible to use a curved monitor in a tournament setting. As such, it’s better to practice with what you’re going to use, rather than fool yourself with a fancy curved one, and end up getting whooped on the big day.

That’s the reason why professional gamers largely stay away from curved monitors (except in paid ads). There’s no need to fool yourself with something that you won’t use when the stakes are high, and as such, they would rather game on the less sophisticated 24 Inch Monitor. That doesn’t mean the curved monitors don’t have their benefits, as we’d be touching on that in a bit.

In summary, Pro Gamers do not use curved monitors for gaming because tournaments and professional play do not typically support them. Even if they did, there are plenty of games that would not benefit from having the curved monitor, and may in fact hinder the gameplay. That is not to say, however, that all games are hindered with the use of a curved monitor.

The Benefits of Using a Curved Monitor

Curved monitors certainly have the look department covered, as they are some of the better-looking gadgets they can find anywhere. However, it’s essential to examine whether they have any other tangible advantage. So here are three of the most apparent merits that come with using a curved portable monitor.

1) Better for Your Eyes 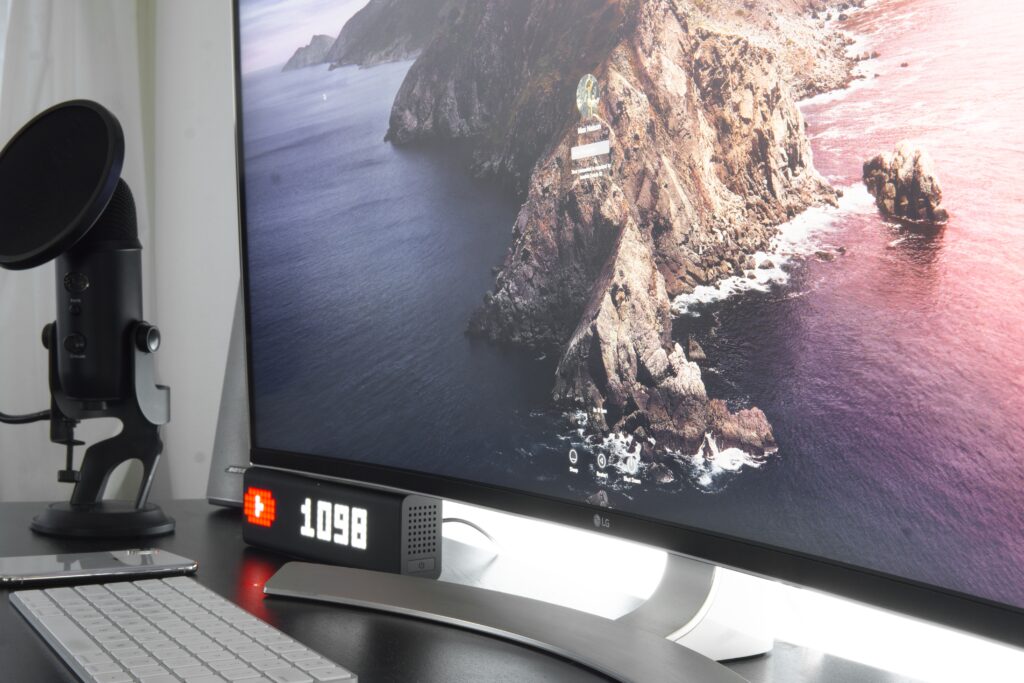 That’s mainly because “your eyes don’t need to do as much work when adjusting to the images at various distances on the screen, which translates to less eye strain overall.”

This is so different from what the eyes go through whenever a not curved monitor is used. What’s more, curved monitors are known to hardly cause headaches, while we can’t say the same for their not curved counterparts.

2) Imitating the Three-dimensional Space that We Live In

It’s no secret that we don’t live in a flat world; most gadgets are made to mirror that specification. That also applies in the professional gaming industry, as “how the monitor is curved creates the illusion of having peripheral vision in-game, making the gaming experience more immersive overall” and giving you a wealth of possibilities.

It’s the same reason why cinemas use curbed screens, and that’s why gaming bodies outlaw curved monitors, as they don’t world individuals getting unfair advantages. The whole point of getting into a professional gaming competition is to win. However, it would help if you succeeded in fairness, which leads us to the next point worth addressing.

The Drawbacks of Using a Curved Monitor

Professional gamers are super locked in when it’s time to partake in a high-stakes tournament, as that’s the only way they can measure their growth thus far.

We get that curved monitors to have a few cool features. However, there’s no way you’d expect a professional gamer to spend almost a thousand dollars purchasing a monitor that he won’t use in a tournament. That’s one of the most significant drawbacks in curved monitors, as inflation has proved to be its second name, and there’s no end in sight for what’s seen as gross manipulation from the producers of curved monitors.

That’s why the average professional gamer would prefer to buckle down and purchase an affordable ordinary monitor for gaming. That way, he or she would be getting value for money.

All around the world, the standard monitor for gaming is the none curved, 24 Inch Monitor. That’s the golden standard when it comes to professional gaming. It’s better than a skilled gamer gets used to the competition, as that way, he or she would be in a better position to perform to his or her potential on the big day. Curved monitors aren’t allowed, so why bother using them in practice?

While curved monitors might look more luxurious and seem to be the industry standard in terms of affluence, they aren’t exactly the most versatile products on the market. That title undoubtedly goes to the flat-screen monitor, as they are helpful for gaming, leisure, word processing, graphic designing, and so many more tasks.

What’s more, you’ll be getting a fantastic value for money with each purchase, putting you on a higher pedestal when compared with your peers and competition. Curved monitors are typically used for viewership tasks such as live streaming of movies and video conferencing, while flat-screen monitors are used for those and a host of other tasks.

Can You Put 2 Curved Monitors Together?

Just like any other monitors, you can use more than one curved monitor at a time. You may have to get a little creative with your setup, but it can be done!

We like to set them up in line with one another, so the transition is smooth glancing from one to another. Try it out and see what adjustments you need to make to make it work for your space.

So, do pros use curved monitors? They might, but from research, none of them actively use them to build up high-stakes competitions or the competitions themselves. It won’t be advised for a professional gamer to purchase a curved monitor to fulfill their gaming ambitions.

It’s a better choice to get a proper and well-optimized flat-screen monitor, as that’s likely what you’ll meet on the big day. There’s a thin margin in professional gaming excellence; you could do yourself a favor by being on the right side of the divide.